Playing Audio from the Arduino

Recently, I’ve been experimenting with playing audio from my Arduino. At first, I was using one of those crappy Radio Shack piezo buzzers. After a while, I got tired of their high-pitched squealing and decided to try playing the audio on a regular speaker.

At this point, I encountered a problem. It’s not entirely obvious how you would hook up wires from the Arduino to the analog audio jack from a standard speaker. At first glance, the audio jack just looks like a single piece of metal. So where do you put the signal and where do you put ground?

Turns out, the audio jack is actually three distinct pieces of metal separated by two black insulating bands. The piece of metal at the base is ground, the ring in the middle is the right channel audio, and the tip is the left channel audio (assuming you have a stereo speaker). 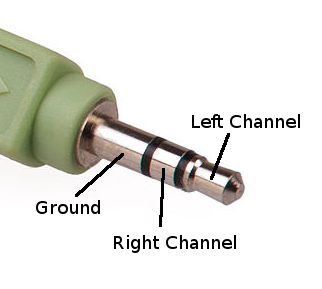 So, I hooked a wire from the base to ground, hooked a resistor from the tip to pin 8, and then ran the tone example from the Arduino website. Here is the result.